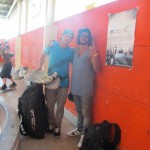 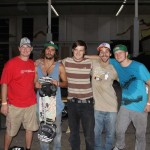 24th September 2011, 02.00 a.m – Gabi arrives at the Ramblas, where Sergi is giving away flyers. The same old conversation starts over again ” Streetboard matters ” . Another contest is taking place and we have no tickets…. ” to go or not go “; that is the question.

Saturday 1st of October, The Streetboard Black Market opened up in the Skatepark parking lot at 13.00 p.m. The sun is shining …very hot …is this really Germany?? The leading traders were Drop Inn and Kiste shop owners were selling items really cheap cheap cheeeaapp !!! We were rolling in a smooth wooden bowl where lines are fast and connected. All the riders started looking for the finest line and warming up with some really “wicked ” tricks. Thirsty now.. Searching for still water and again …only disgusting sparkling water around. Curry wÜrst time after the Big Air contest that was switched into a street contest 1 min before starting.

The riders struggled to create some improvised street course lines using bouth the funbox, quarters and flat rail. We were very impressed by girls like Carmen & Kim. They skated really good! The bowl contest started with four groups of 3, only the best 5 will go into the final. All the riders killed themselves after a 5 jam session battle in which we saw 5 meter transfer ledges bluntslides, big rodeos, fast slides in different corners , one foot nose blunt stalls and amazing cooping combos. Ingo, Thomas k, Malte and we went into the 10 min jam session final. Our Papi Ingo Fohre, prove us once more that he is a natural born killer and he will always be, pulling spectacular half cap 720 tranfers over the hip , as well sw fs 540 and a bs 540 , not forgetting his theck combo tricks. Thomas Kienle, pulled out with the finest flow a sw 360 in the spine to half cap wallride 270 out. Gabi did the sickest fs rodeo 540 in the hip, bs smith bs 270 out on the 5m transfer ledge, big fs mute grap over heats , ( i had alot of fun riding at the same time behind him just 1-2 m a way from his tail, seeing how he was flying and me just behind about to fly, love ya mate 🙂

On the other hand Malte showed off some bs 360 rock , 5mtr. nosegrind and bs blunt transfers , big rodeos on the quarter, 360 over the spine , long crooked along the corner. We were shocked about his riding. Last but not least Sergi Nicolas skated faster than no one , flew higher than any rider and showed off once more , the cheers his ability to perform unthinkable lines keeping his natural style and catching the eye of the all kids in the audience beating their boards against the cooping every time he passed by. Some remarkable tricks were the transfer hip 2 mtr. high bs indy, noseblunt stall on the top of the craddle, sw rodeo on quarter and a spectacular ender bs 540 over the hip , was HUGE !!! ENOUGH SAID !!