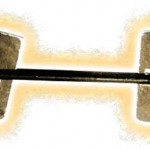 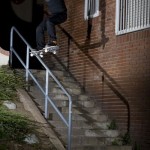 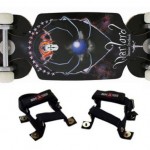 The Streetboard is an articulate skate that have two moving parts, the plates, the nose and tail, that are together by the central bar. The plates and the bar are joined by one kingpin, similar to the kingpin of the skateboard. The movement that you make reminds to a snake in the desert, that’s why the original name is: ‘Snakeboard’.

Snakeboard was invented in the year 1988 by a group of young surfers from South Africa who wanted to simulate the sensations of surfing but on the asphalt, when they don’t had waves in the sea. They created prototypes with all kinds of materials, two plates with trucks and wheels joined by a thin plastic or metal bar.

After a time they put bindings to these prototypes of Snakeboard and the possibilities of movements and tricks increased incredibly, huge airs, rotations, all types of grabs, etc.

Over the time the sport ‘Snakeboarding’ was renamed ‘Streetboarding’ because ‘SNAKEBOARD’ is a registered trademark and the others companies could not sell products with the same name.

But the real revolution of this sport came in the late 90’s when changed his middle bar, until then, very thin and made of a kind of plastic. This material of the bar was changed to wood, similar to the board of the skateboard. That bar gave much more stability and balance, more possibilities for the grinds, slides, combos… and also stability for the airs.

You could say that the Streetboarding is many sports in one: the airs and rotations of the snowboard, the movement of the surf and longboard, the grinds of skateboard and the capacity of make multiple combos like aggressive in-line. If you snowboard and you want to feel the same sensations but on the asphalt, streetboarding is the closest thing you’ll find.

Besides them there are a lot of riders in Spain that skate incredibly like Eric Brun, David La Rotta, Carlos Merayo, Toni Álvarez, Cristian Dedeu, Nacho Ávila, Bernat Pomerol, Xavier Botella, Andrés Rodés and so many others.

Have a look at the BK YouTube Channel  for some awesome video’s.