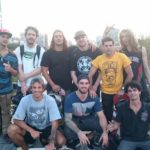 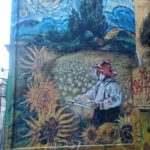 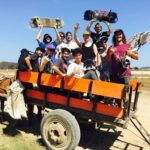 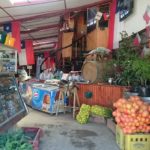 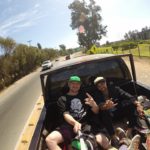 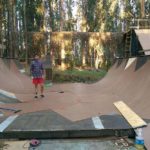 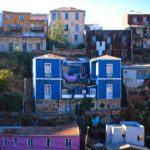 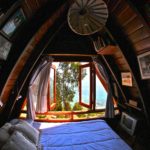 February 20th, 35ºC and my BK black and burgundy Tempo’s are stepping on Chilean soil. I can’t believe it. Only a couple of months ago I was sure I wouldn’t be able to make this happen; I didn’t have enough money or time to even think about being here, but honestly, how could I let this opportunity pass? 24 hours and 3 flights later, here I am, in Santiago, ready to spend the next 2 weeks skating with my brothers from all around the world.

The first thing I noticed as soon as I got there was its beauty. Everywhere I looked there were huge mountains and trees, everything was so green and natural. The people were so nice, two minutes in and a bunch of strangers had already offered me a ride to the city… Then I notice they were cab drivers, but hey, they were nice anyways.

Once I got past the awe of the views I was ready to get things started for real. Outside the airport, after a long wait, my friend Ismael finally showed up to pick me up. We met up with the rest of the crew and headed off to Colmo, a small town on the outside of Santiago, where we spent the first week.

Ismael’s house was incredible, there was so much land that we couldn’t even see through all the trees. This was guarded by lots of unfriendly dogs that were barking and following you all around the land. There was a great swimming pool next to the house, perfect for morning swims, and of course the best thing that any Skateboarder, Rollerblader, Bmxer or Streetboarder could have in his own place, a Skatepark. We all agreed, this was “Paradise”. A perfect wooden and spaced launch with a quarter pipe at the end, a playful and fun miniramp and a nice trampoline to train aerial tricks. The greatest part of all of this was the BBQs we did at night next to the swimming pool until the beautiful chilean sunrise.

That week was awesome, we were able to practice old tricks and try new ones that we can’t do in our local skateparks, as well as film some shots with a drone that got us great footage. During these days we also took the chance to drive around to nearby towns and cities; we went to different beaches like Valparaiso and Viña del Mar, which have surprisingly cold waters. At night we would head off to night clubs; Chile has a huge variety in styles of night clubs, some of them had techno music, others hip hop and others had a little bit of everything. Doing all these different things I was definitely lucky to have packed my luggage with BKs perfect for each occasion.

After this crazy first week we headed off to Santiago to do some more damage. We skated some nice plazas located downtown like Las Condes and found some great spots in the streets as well. There was this one handrail that kicked all our asses, there was no way to ride it without going down. It was great to hit these spots with the guys, we were a big group constantly challenging each other and catching the best moments on tape. There´s nothing like riding with your brothers and always wanting to get better and better.

In Santiago we met lots of nice people and had the chance to eat some delicious dishes that you can find in all corners, like Empanadas and some other local food. The nightlife was also pretty fun, there was a street full of different pubs, a crowd of people dancing like there was no tomorrow and insane light shows.

Two weeks had passed and I couldn’t believe the trip was coming to an end. Chile definitely exceeded my expectations. I have been places I only dreamed of going, met people I never thought I would and most importantly shared an amazing experience with the brothers life has given me. The videos and pictures speak for themselves, and I can say the same thing about my BKs, they definitely would have some great stories to tell. I can’t wait to get back on the road with these guys and head off to a new adventure. Chile missions was one big success.