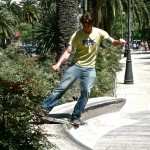 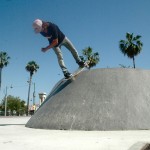 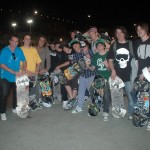 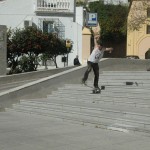 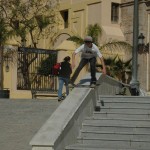 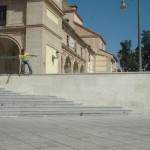 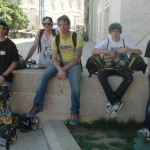 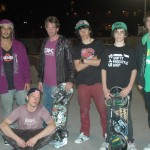 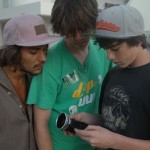 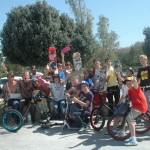 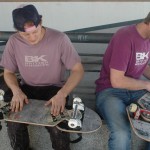 Cristian Dedeu, Sergi Nicolas and Andres Rodes took a really early flight around 8am to Malaga. When they arrived, they took the train to the center. David la Rotta resides in the center of Malaga and the BK Rider Team spent the rest of the week in his apartment. As the 17 year old David is still in scool, they had to wait and picked him up right after. On their way to David they picked up Gotthard Pilsner at the trainstation. In the afternoon they went skating with some streetboard locals named Nacho and Pepo. The locals said it was a warming up session, but it was a crazy session. Gotthard was doing some long, long bs bluntslides down flat and David and Nacho were doing crazy-scary transfers. Right after this crazy session it was dinner time, but not for long, because they saw a really nice double rail, 15 stairs. Gotthard killed it with a sw lip, Sergi died big time when he jumped on it to make a bs boarslide. Also David did his first try hahaha, poor Sergi. Then finally it was dinnertime and the end of day 1. On the way home they picked up Thomas to make the Team complete. The second they woke up pretty late. Sergi and Andres buyed some food for the rest of the week, while the team was getting ready to hit the streets of Malaga. They started with some ledges near the house. Waiting for the police car to dissapear. After a short walk they ended up at Plaza Marina. A amazing place with banks, ledges, gaps, stairs and more. This was a good practice for the next day, when they are going to film. In the afternoon they went to Fuengirola SkatePark with amazing bowls. Sergi was flying crazy with David and Thomas. Gotthard and Cris were killing the rail as always and everybody had a good time. Back home, Thomas prepared an amazing dinner for all of us. A great Chef! Thanks Thomas. Day 3 they went to the curve ledge. It was great! Once again the weather was amazing, very hot sun! They walked a bit around to find a good plaza with enormous hubas were David land a sw lip and Andres did a bs boardslide. Gotthard died trying a crazy hubba, you will see in the video. Thomas made a good puncky trick and Sergi was almost landing sw fs bores when the police came. Luckily they didn’t get a fine. In the afternoon around 7pm, they went with Nacho to the beach. There they saw the most perfect 7 meter ledges ever! Unfortunately the battery died and we had to come back another time to film. The BK Team pulled off some crazy tricks anyway. The next day they went straight to the same spot as last night. They met Carlos, another sick rider from Granada. According to Andres this guy has the best style ever and the best girlfriend who knows how to ride, but she prefers the snow. In the long ledges Sergi made ta long backard revert, Cristian did a bs pivot to fs, Gotthard outdid everyone with a sw fs tail to sw nosegrin rever and Andres did a bs nose slide 270 revert. This spot was sick! Then the famous rails where Gotthard tried a 360 k and his shoulder poped out. Therefore they went to the hospital to get it back in place. The BK Rider team skated till the police showed up again and they had to go home. Day 5: The BK Rider Team planned to stay in Malaga, but David came out of scool earlier as planned, so they went to Granada. Here is the best skate plaza ever called Bola de Oro. David was killing it on the fun box with a bs nosegrind 15 meters long. Sergi and Andres were battling and Andres won. That made his day. Unfortunately not for long, cause Sergi killed the second battle. After a long day skating, they went to Mc for a big food fight. Imagine how that ended up… At day six it was show time! We made a big demo and the local tv station of fuengirola was there. There even were little fights between kids, trying to get all the BK stuff we were handing out like shoes, t-shits and stickers. After the demo they went to a villa in the mountains to skate in a real pool. It was very hard to ride, but Nacho, Thomas and Sergi were the only ones riding it. It was really really hard, but Sergi killid it! After all this we were more tired then ever, time to sleep. At the last day we wanted to skate like crazy. We went to a mini ramp to warm up. After a small walk we found a amazing plaza with everything we were looking for like wallrides, rails, manualpards and a double king rail. David tried and several times he almost landed, but at the end he died big time! After a small lunch Cris did a perfect bs 5.5, but the camera dies when he was on the way to jump. Cris was so pissed off haha. After the camera failing we went home and talked about the great time we had. Malaga could be the new Barcelona for streetboards since it’s full of amazing places. And the Riders are looking forward for the next trip. A little word from Andres: Another thing is that the camera from Cris broke the 1st day pitty !!! but spending a week with these riders has been the best week of skating that I ever had and i’m looking fowards for the next trip, where??? I also been progressing a lot.. I think skating with people, who are on a higher level than I do . Thanks to British Knights for this oportunity to be part of the team, thanks to David’s mum Gloria for the duplex we had for the week, Greetings Andres