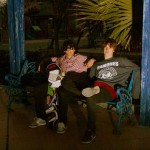 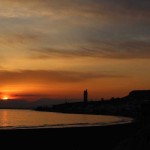 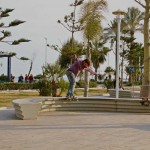 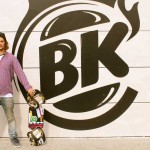 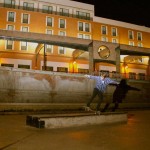 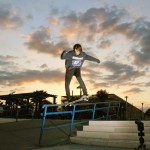 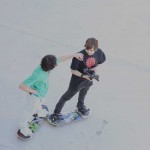 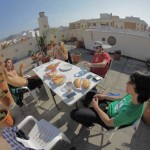 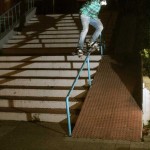 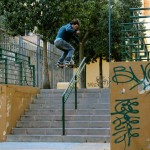 Sergi called me to say that he wanted to come down to Malaga to film me. My winter video part for BK Footwear plus he will come with Cristian and Bote alias Revet to film some footage for the next Drop Inn video " DROP THIS ". They stayed at my big house in the capital of Malaga for 10 days non-stop skating. Your dream 🙂 It was my birthday. Such a great present that this guys came over. They came quite early around 08.00 AM. We had a long breakfast in my terrazzo, while discussing the plans for the next long days. As I live in a attic, Sergi was looking around and he saw some ledges that could be skated. We were all tired but didn’t wanna lose any time so we left the house with boards, cameras and some bottles of water. Once we got there, we had to jump over some fences of a school, means private property, so it was exiting. The weather was really nice for February. That night we meet up with Nacho Avila who drove us around the city to show us a lot of damn good spots to skate the next days. Next morning Bote and the girlfriend of Sergi called Anna arrived in the city. Again a beautiful day, perfect to go out and skate. This day we walked like never before in my life. Meanwhile the walk we found the sickest drop ever and once again we had to enter in the back door. Jumping and entering in private property. That gorgeous spot was for Bote who landed really quick. I filmed a ledge that I never saw before. Sergi likes to walk and search all the corners for spots and this make us find good stuff.

Thursday
Nacho wasn’t working so he called us saying “guys let’s go I’m going to take you to some secret stuff”. We drove for a while till we got into a get area and a perfect down long rail which was about to be killed by me, kidding! The material wasn’t the best, but I could film a good long 5.5 after getting dark. After driving and searching for a while we found the typical metal long ledge in a factory. That night I dropped the bag of Cristian‘s camera and I broke the fisheye, he was about to kill me or kill somebody while Sergi was preparing the lights. The camera feels like this is improving 2 cameras, lights. I realised I live the good live. That ledge was damn nice and gentle when he led me do what I wanted. A 80 sw nosegrind 360 out. Felt so good.. After that we went to another little town were Sergi filmed a huge gap, we were starting to feel the pain in our body’s that night.

Wednesday
Weird day I was out of town and went to Granada to see me girlfriend. Anyway when I went home to see the footage of the guys and holly shit I had no idea how they found that many good spots around my house. It’s like these guys smell good spots. That night is the only one we went out, but what a night. I don’t remember anything!

Thursday
We started late that day after Sergi’s sandwiches as every day. He is such a papa. We went to Weling, famous of his ledges and as always someone has to interrupt the session POLICE! We went a bit further and we skated some perfect marble ledges were Cristian did a really style line, I love the way he skates, you never expect anything from him and then ‘POW, good tricks and good style, he is so clean.

Friday
Bote left, it was a chilling day. We went to skate down in the river next to my house. Some skater had build a small skate plaza with some rails, ledges, euro gaps. The night arrived and we wanted some action. Sergi wanted to film some pucky stuff and so he did with the pressure and the screams of the guardian of the building. He screaming and Sergi going down was funny , he never cares… After Cris had a trick in mind on a perfect 10 stair rail and o he did after we had a flight with a homeless that was sleeping next to the rail, he was so dam pissed. The day was complete. Good session and good tricks.

Saturday
We didn’t know where to go and google earth , saved us . Sergi was watching a skater video. He saw a spot and a rail behind, we started to google and PUM !!! Around that same spot many others gaps, rails massive rails flat rails, PARADISE TORREMOLINOS WE LOVE YOU !!! One of the best days of my life . Days like this makes me realize why I started skating and to step-inn and ride my streetboard makes me feel alive.

Sunday
We left the house late, but with full energy. We lost almost all day searching for the perfect spot, that we never found, but at last we did some tourism in the city by car , so the night was on. Sergi made the biggest bs 180 carried by a car, after that Dedeu made a big gap over a fens. This all ends beautiful at 03.00 am. We are at our best at a night session.

Monday
Last day full of problems. We got bored very fast. In the end of the day we skated on some flat blue famous rail at the beach where Cristian and I had an amazing session while Sergi was trying to get some good pictures of us.

The tour ended
Now back to the reality, wake up, go to school, no streetboarders around. I miss the guys after being here 10 days non-stop skating. These days makes me think to push myself harder and deliver a lot from my side to the sport and I can’t wait to hang with them again.