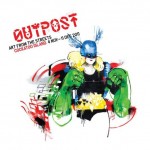 Art from the Streets

The crown jewel of Sydney harbour, Cockatoo Island, a former military outcrop and penal colony will be transformed this November. In conjunction with the Sydney Harbour Federation Trust, witness the island wide invasion as aMBUSH Gallery launches a curatorial take-over – transforming the industrial monument into a battlefield of street-art. The Outpost Project will be the Southern-hemisphere’s largest Street Art Festival to date, with a projected 90, 000 visitors over the course of 5 weeks. Amongst a myriad of forums, educational programs, aMBUSH will bring to the table the nexus of content featured on the island.

Kid wonder and Australia’s very own rising star, Kid Zoom, who has been described as “Rembrandt with a spray can” will be dominating the Turbine Shed with his project Kid Zoom: Home.

Our very own subversive Australian delegate for the International street art and graffiti movement, Anthony Lister, will pepper the island with his signature garish faces grinning larger than life transposed on enormous balloons.

Letterform king, DMOTE, arguably Australia’s prime delegate of the traditional graffiti school, will be gracing our shores across multiple projects but primarily in his own panel installation demonstrating the new leaps and techniques which compliment his ever evolving style.

Nestled in a cocoon of cotton, draped adjacently to the Turbine shed lies NEXT. Curated by Eddie Zammit, founder of T-world (the only T-shirt journal on the planet), NEXT sets the benchmark for T-shirt graphics globally. The exhibit celebrates the street art category using the T-shirt as its most accessible canvas. As part of the exhibition, over 1,000+ T-shirts will be displayed from over 200 international and local labels. The space is accompanied by an exclusive portrait photography exhibition by Nicole Reed, featuring some of the most influential designers, artists and label founders from the T-shirt world, with content spanning 7 continents she will be presenting the culmination of her photojournalistic documentation. The project offers 20 artists and labels determining the future direction of T-shirt graphics from the likes of leading creatives 123KLAN, jeffstaple and Alex Trochut.

Joining us from Melbourne, is powerhouse creative collective Everfresh Studio. The crew whose stellar lineup includes Phibs, Meggs, Rone, Reka, Sync, Prizm, Wonderlust, Stabs and Makatron will be tackling the East Apron Cliff Face with a tongue-in-cheek statement of the anti-graffiti rhetoric of yesteryear, over the course of the festival’s first three days. It will be left towering over the island, welcoming patrons as they arrive on the ferry. A sight for sore eyes, Project Ugly will sit gazing over the harbour displaying 20 pannels from interstate street artists, including an onsite live painting on an industrial scale by Sydney figure Sprinkles and as well, Brisbane based Shida will unleash his feline extra-dimensional creatures. Shida will be painting on the Saturday 5th, and Sprinkles the Sunday 6th November between 10am and 5pm. Amongst the pre-created collection will be Above (San Francisco), Creepy and Daek (Last Chance Studios, Perth) and Drypnz (NZ).

The Mays Lane collection, evolved from a way to promote graffiti in a legal context from cultural bastion St Peters, into the distilled efforts of the finest National and visiting International artists.

Serving as the festivals inundation, the rite-of-passage, Artery, located in the Dog Leg Tunnel will greet patrons upon first landing – being a sample of the creative tone to come. This will be Australia’s most premiere group show to date, featuring a who’s who of major players in the Australian art scenescape including Meggs, Haha, Rone, Yok and Drewfunk amongst other featured Outpost Artists.

The highly successful Secret Wars, will be progressively intensifying over the course of the festival, with two artists battling head-to-head in a 90 minute freestyle creation each heat. Throughout the duration of the festivals run the battle royale will be staggered with heats being:

Melbourne folk artist hero Ghostpatrol will translate his dreamy, fantasy universe into a bi-locational installation with Tristan Jallelah. The projects will replicate his stylistic world of wonder akin to a boy and the universe. Featuring kilometers of coloured wool, the project will be an exploration of the Moon Titan of Saturn and humanity’s place in relation.

In her signature, delicate, dark yet feminine style, Vexta will be tackling a sheer mass of corrugated iron on the Island with her fluid use of stencils and intricate hand painted detailing. Her work will be a personal extrapolation onto the medium complete with neon-drenched figures suspended in time and space.

Born from complementing styles, Phibs, Beastman and Numskull, three Sydney based heavyweights in the Street Art scene, are collaborating to fabricate an installation called Temple. The trio are creating a teepee in their whimsical dreamlike character and tribal leanings.

Also included will be the Oi You! Collection featuring the largest private collection of Banksy’s, amongst works by David Choe and Herakut. As well, live painting by Sao Paulo artist Ethos and Belgian monotone muralist Roa. Throughout the duration of the festival will be the Pro-AM tour Grand Final run by Skateboarding Australia. Inclusive will be an array of forums, family friendly activities and educational workshops and much more throughout the festivals tenure. Pick up a guide to see all the details.

The festival itself will run from the 4th of Nov to the 11th of Dec 2011, in a joint collaborative effort with aMBUSH Gallery and the Sydney Harbour Federation Trust. For more information please visit www.outpost.cockatooisland.gov.au or www.ambushgallery.com